We recently moved into a house with apple trees in the garden so decided to have a go at making cider. The process is relatively simple and is described excellently by Andrew Lea at The Wittenham Hill Cider Pages. As such, these pages just give details on our particular product and includes some of our tips.

The first step was the apples. I'm not sure of the variety but they look similar to a Worcester. The trees were planted around 50 years ago so are more likely to be a traditional English variety. We used a mixture of salvageable wind-falls and picked fruit and used a total of around 47kg of apples. 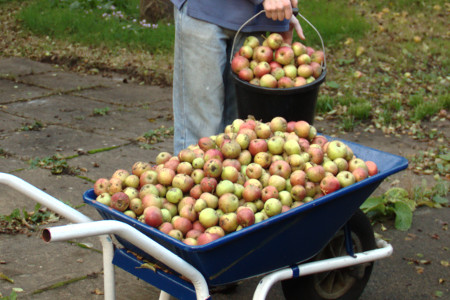 Some of our collected apples in a barrow

No network on resume in OpenSuse : posted in Computing

I noticed that my network connection was not active after a resume from sleep mode in OpenSuse 12.2

The symptom was that when I resumed, the network connection would not be active and ifconfig showed only the lo connection, not eth0. I could manually solve this each time by running the following commands but this was a pain and hardly a seamless user experience.

Munin is a computer monitoring tool which provides useful tracking facilities to monitor hardware and software over time. I've found it very useful but one of my main gripes has been poor colour choice for lines on graphs. By default, for many plugins Munin chooses a colour from an internal palette for each line on a graph. This seems fine but in practice, some colours are very poor contrast against a white background e.g. lime green:

The lime green line in the middle is the one I'm really interested in being able to see at a glance. I tried googling for all manner of things regarding changing default colours but had no luck. Everything was very unhelpful or only useful if you were writing your own plugin. I've never found the Munin documentation particularly accessible either which didn't help.

In the end, I managed to solve my problem by assuming that the default colours must be stored in plain text somewhere on the filesystem so I ran a search to find the relevant colour's hexadecimal code: #ccff00 i.e. Lime green. The following line returns a list of all files on the filesystem (without leaving it for other mounted filesystems, as specified by the -xdev option) and then searches for "ccff00" in each, returning any matches with a file name:

Spinning down hard drives in Linux : posted in Computing

I have a system with an SSD containing my OS (OpenSUSE) and a lot of my data as well as a traditional spinning hard drive with extra data. I don't often access the data on the spinning hard drive so would like to be able to spin it down to both make it quieter and use less energy. This turned out to be harder than originally envisaged. The ultimate solution is below but here's a little background to start.

Lists of data, formulae and relationships : posted in Science